Ray Colliers Wildlife in the North – The Eider Duck 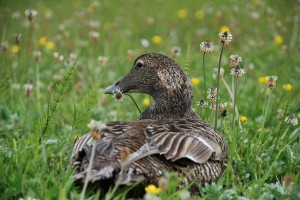 A female eider duck on her nest

One of the most attractive and large members of the duck family is now building up their numbers in the firths around Inverness and up the east coast. It is the largest duck in Europe and characterised by its very bulky shape and large, wedge shaped beak. It is one of the sea-ducks and shares the firths with other such ducks like the common scoters and long-tailed ducks. It is the eider duck whose numbers build up in wintering flocks in various traditional sites with sometimes over 400 birds involved. There was a notable count in September 2011 at Embo where 800 were in involved although numbers of up to 2-300 in others are more normal. What is interesting about such winter flocks is that courtship displays may be seen at any time. These involve the males dramatically throwing their heads back and calling with the haunting dove like coo-ing calls that echo over the firths and bays.

Three good places to see them are at Loch Fleet, Tarbetness and Burghead. There is the added attraction at Burghead, which is my favourite choice, as there is always the chance of seeing a much rarer eider, the handsome king eider. The occasional king eider can also be seen among the resident wintering flock at Loch Fleet and another attraction there are often common seals to be seen in the same area of water. The wintering numbers of eiders in Scotland is about 65,000 birds so it is a relatively quite common duck. Eiders are marine ducks that live around rocky coasts and even in the breeding season they need islands or low lying land close to the sea. Most of the eider that breed in the UK are in Scotland where the estimate of 20,000 breeding pairs is around 75% of the UK pairs.

The eider is celebrated by the fact that it is much prized for the legendary eiderdown which is the feathers from the female’s breast. These days it has been largely replaced by the down from domestic geese and synthetic alternatives. Indeed eiderdown is so rarely heard of these days it seems to be almost a thing of the past. However, it is still gathered in some countries and one of the leading ones has always been Iceland where the traditional practice still continues. Collecting eiderdown is by the commonly called “farming” of eider which gives the impression that the birds are rounded up in some way or kept in captivity. This is far from the truth, as with the traditional colonies of eiders nesting, there is only the minimal disturbance. The only “farming” as such is to make sure the eider colonies are not disturbed and any predators actively discouraged.

The female eiders are left to incubate their eggs in peace. The males assist whilst the clutch is being laid but then seem to lose all interest when incubation starts. The female relies on her ground nest to be well camouflaged by her varying shades of brown feathers making the bird very difficult to see. The down feathers from the female’s breast are not collected until to the eggs have hatched and the ducklings wandered away from the nest. If it was not then harvested it would just blow away in any strong wind. The eiderdown is now very expensive and, as for the so called farming, it takes the lining of 60 nests for a kilo of down but when a kilo can fetch £1,000 it means it is worth all the effort for the “farmers”.