Covid-19: We are now accepting bookings for holidays arriving from 3rd July 2020 on a cottage by cottage basis.

Ray Colliers Wildlife in the North – The Red Deer Stag 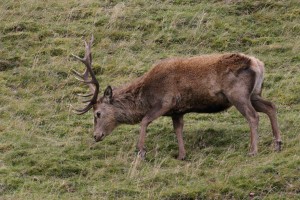 The red deer stag is legendary and at the same time may well be at the top of the list of iconic wildlife in the Highlands. Its image has been used on numerous coats of arms in Heraldry, probably more than any other form of wildlife. The stag has been used to promote various media messages from advertising holidays to brands on household goods. It is the most popular image to put over to visitors to Scotland and in sporting terms only the red grouse and wild salmon can compete with them. The marketing of red deer stalking, mainly the stags, can make or break large and small estates and it amounts to a large industry. The number of staff on estates can often depend on the stalking red deer market. It is often the culinary highlights of many cooking books and menus, and the list of accompaniments to go with it is long. It was, and is, the poachers dream and even today the illegal sale of venison – under the counter – is still widespread, a black market paradise.

Of all the images ever put over about red deer, the most impressive and influential must be Edwin Landseer’s painting of a red deer stag. He painted it in 1851 and it was part of a commission he had for three paintings by the House of Commons. Once they were completed the House of Commons refused to pay the £150 promised for the commission so the three were sold to private collectors. The red deer stag was resold at Christies in 1916 for £5,250 which was a great deal of money in those days. The original is now part of the Diageo collection and is on display in the National Museum of Scotland in Edinburgh. It was one of the most popular paintings of the 19th century and seemed to very much epitomise the wildness of the Highlands.

However, in some ways the famous painting just perpetuates a myth associated with red deer stags, especially at this time of the year. Most of us have ideas about red deer stags, especially during the annual rut. Books and the media in general give us the impression that red deer stags, at this time of the year, spend all their time displaying to each other and fighting, sometimes to the death. It is indeed true that they are pre-occupied with attracting the hinds and so much so they do not feed for long periods. That well followed programme “Autumnwatch” on the Television repeatedly shows the red deer rut on the Isle of Rum. During this the viewer is given the impression that the stags spend most of their time actually fighting. In all the time I have watched red deer on many estates, and indeed culled many of them, I have yet to see a serious fight or even many fights as such. More often than not the stags, if it ever gets that far, will walk side by side, roaring and sizing each other up. It does not pay them to get involved in actual fights as it could easily injure them. With red deer it is definitely a matriarchy, the hinds dictating the annual cycle.

The painting also has a flaw in that it shows a stag with twelve points on its antlers . This number of points indicates it is a “Royal” which is much prized by sportsmen who like to hang trophies on the wall as a measure and reminder following their exploits. The photograph shows a “twelve-pointer, A ”Monarch” should, by tradition, have 14 points although such a stag is sometimes referred to as an “Imperial”.