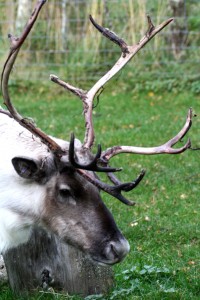 With so much talk about re-introducing wolves and bears to an estate in Sutherland, it is easy to overlook the re-introductions that have taken and are taking place. Some are obvious such as the famous reindeer herd in the Cairngorms but there are others many of us now take for granted. A good example is the red squirrel that many people are fortunate these days in having them regularly coming into gardens. There they were first attracted by the bird feeders such as containers of peanuts. Then special red squirrel feeders were designed and introduced and the animals literally lifts a lid to get at the contents. Few people realise that the red squirrel was at one time believed to be extinct in the Highlands. This was mainly from change in woodland cover and shooting or trapping.

Then came the famous re-introduction on the Lovat estate near Beaufort Castle in 1844. Then there was a bitter twist as the squirrels spread so rapidly that by 1903 it was felt necessary to form the Highland Squirrel Club. Between then and 1946 over 100,000 red squirrels were killed. It seems highly likely that these are just the ones that were submitted for bonus payments and the actual figures must have been much higher. After the club disbanded the red squirrels once again spread although even these days there has recently been re-introductions to various estates in the north including Dundonnel Estate near Ullapool. There are other re-introductions such as the wild boar, although this was by accident rather than deliberate re-introductions. The boar have been so successful that they are now breeding on the east side of Loch Ness. The beaver is another with escapes being the main cause although the current breeding programme may mean they will be released in the future.

Whilst many of the mammals involved became extinct relatively recently with reindeer it is many thousands of years since they last roamed the Highlands. Their remains have been found in the famous “Bone caves” at Inchnadamph along with those of Arctic fox and lynx. Now a visit to the resident herd of reindeer, re-introduced in 1952 and flourishing, can vary from guided walks on the hills to seeing the reindeer at the Visitor Centre. At the latter you can look much more closely at these incredible deer that have adapted so well to winter conditions. I went to the Cairngorms last week and found the main herd well below the summit and all fairly close together. What impressed me straight away was the size of some of the alters. I have one I bought at the centre some years ago and of all the various antlers in my collection from red der to muntjac the reindeer one is the most impressive. They are the only deer in the UK where both the males and females, they are called bulls, cows and calves, have antlers. The theory is that the cows keep their antlers through the winter as it helps to get through the snow for them to feed. This keeps them in good condition so they can feed the calves. As the bulls shed their antlers for the winter this means that the cows are dominant and can get their feed first. Another adaption for the snow is the reindeers’ very large feet. The hoofs are broad, flat and deeply cleft which help them walk on very soft ground and snow. Coupled with this is the fact that their coat is remarkable for its density and compactness.