Covid-19: We are now accepting bookings for holidays arriving from 3rd July 2020 on a cottage by cottage basis. 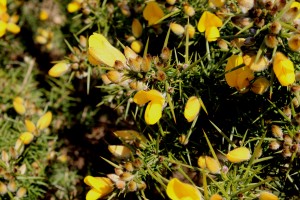 We tend to overlook gorse, often called whin in the Highlands, despite the fact that historically it has been one of the most useful of plants, very symbolic and has attracted writers, artists and poets for a very long time.  In a recent blogs about the signs of spring with flowers, trees and shrubs I forgot all about gorse.  To put it into context it could not really be regarded as a harbinger of spring as it is in flower, if you are in the right areas, all the year round.  Hence the lines “When gorse is out of bloom, Kissing’s out of season”. If you are inland around Inverness gorse is not normally in  flower in the winter months but if you move to the coast you will gradually see more and more yellow blossoms well out. The reason for this is that as you approach Inverness and along the coast the average temperatures are slightly higher, enough to make the difference with gorse flowering. At the coast you will see banks of gorse in their masses of yellow blossoms although their heavy scent of summer is still to come. Last week I took the photograph of gorse at Alterlie Point, a few miles east of Inverness, using a Canon EOS 600D plus a standard lens. The blossoms were golden yellow but I could only get a faint scent of the almonds for which they are renowned.

In the old crofting days, livestock such as cattle, horses and sheep used to browse on gorse as part of their diet but only on the fresh tender spines.  Now it is mainly deer and wild goats that browse on them and creating all sort of shapes like topiary.   Gorse was also used as fodder for livestock once it had been crushed by special machines.  Near the croft houses the gorse was planted so that they would grow as shrubs so washing could be kept on them to dry as the thorns kept them from blowing away. Gorse has always been well known as a source of fuel and feed in the Highlands and its uses are often mentioned in the Old Statistical Accounts of the 18th Century. Large areas of gorse give shelter to some specialised wildlife such as birds and in the Highlands it is an important refuge for stonechats that, with the shelter of the gorse, stay here all the year round.  There are around 20,000 pairs in Scotland and many of these are in the Highlands. One surprise, considering the spines, is that there is a butterfly whose caterpillars feed on gorse. It is the tiny green hairstreak that flies in May and June and occurs around Inverness and down the Great Glen.

Local names for gorse are whin, furze, fuzz and honey bottle.  The Gaelic name is Conasg which is derived from conas – to quarrel or wrangle. This is from the belief that if you gave someone some gorse flowers it would lead to a quarrel. Each of the eighteen letters on one of the old Gaelic alphabets was traditionally associated with a native tree and “o” was associated with whin. The shrub was well liked by the clans as a plant badge which they pinned to their bonnet or plaid.  Perhaps it was popular because of its evergreen spines but whatever the reason it was used by the Clans Logan, MacLennan and Sinclair with the latter two registering it at the Lyon Court.