The Song Thrush – Ray Colliers Wildlife in the North 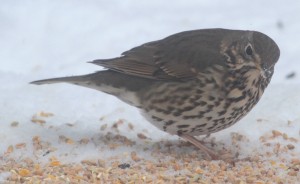 It will not be long before the early dawn chorus gets underway way, indeed some readers have already reported  that blackbirds are in full song in their gardens.    No such song in our garden where there are plenty of blackbirds but they may well be birds that will return to Scandinavia before attempting to display for breeding.   We tend to forget that whilst very large numbers of redwings and fieldfares immigrate to us from Scandinavia  for the winter months  so do smaller numbers of blackbirds.   The same can be said of the song thrush  but in even smaller numbers than the blackbird.   We tend to just accept the song thrush but despite their presence in many gardens they are on the  Red or danger list in the UK.  This means they are one of the most threatened species in the UK because either the number of birds are rapidly falling or their ranges are contracting.  In the  case of the song thrush it seems both are causing problems although nobody really knows why.   Some sources say it is because of farming techniques that have changed so much and these include drainage, loss of permanents pasture  and the removal of hedges.   Whatever there is no doubt that song thrushes are in a  bad way and this is likely to continue downwards unless we put a stop to it.

In the Highlands song thrushes start to breed in March so it will not be long before the birds you see in your garden have to stay or move back to their breeding grounds on the continent.  After the breeding season, song thrushes in the Highlands will move from upland areas to lower ground or even the coast  but many leave altogether and move south or south west to over winter in England or Ireland.     Then there is confusion as song thrushes from the continent  pass through Scotland in varying numbers but sometimes  large in spring and autumn with some staying, although most of them move south or south west.  For those song  thrushes that stay to breed gardens are often one of the places they choose.  Once the song is going I am always reminded  of the lines from Robert Browning’s rapturous thrush that “sings his song twice over”.  The song thrush  once led the RSPB poll for the best  singers and it is renowned for mimicking other birds such as  great tit, lapwing and redshank.

I took the photograph in our garden just south of Inverness and it is unusual in that it is with   chaffinches taking mixed grain on the ground.  This is unusual as  song thrushes very rarely come to  feed put out on the ground or at feeders.  They will eat snails by bashing them on a stone or other object – hence the name for the song thrush’s “anvil”. Instead they prefer  earthworms, caterpillars and other insects especially beetles, and fruit and even berries in the Autumn.     There are intriguing records of song thrushes been found on the foreshore of the  firths  around Inverness.  They are after snails and deal with them in the usual way.  What is intriguing is that they have been seen doing this along with waders such as turnstones who are treating snails at rock  pools in the same way.  It just seems very unusual to see song thrushes at the seashore bashing snails.

There are five Scots names including mavie, mavis and thissel cok.  There are three Gaelic names  with perhaps the most appealing being “Smolac” meaning  ember.   The others are “Smeorach” and “Ciarsach” meaning song thrush and dusky one.