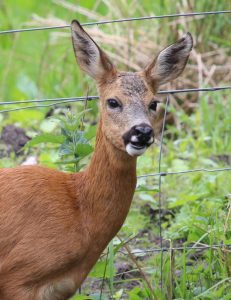 There is now such a wide variety of food to put out in gardens for  wide range of wildlife from birds to mammals that it is often difficult to choose.   In  the run up to  the festive season it seems that many people were  giving bags of food as presents which was a  very good idea.  A quick look around the Garden Centres and Stores that  stock such food revealed that the most popular food this year has been peanuts.  Indeed when I went to buy a  large bag last week I could only find one  garden centre that had any left and that was one bag under bags of other feed.    Peanuts are an obvious choice because so many birds, and mammals for that matter,  will take them but there are others to bear in mind.  In our garden, for example, there are also mixed seed, suet balls, nyger and  sunflower seeds.

0ne type of food that goes out fresh every day are the apples and these are ripe eating apples and they are taken in a variety of ways.  We came across the fact that roe deer eat apples by chance as some apples were left out overnight for the early rising blackbirds.  One of the impressive sights in garden feeding is to see  a blackbird tackling  apples.  They do it with such vigour and intensity and it is  a joy to watch.  One night the usual apples were put out for them, sliced in half so that they are easier to tackle.  Then the overnight camera recorded the usual badgers coming in when, in the middle of the night, there was something different.  There were four badgers at the peanuts, especially put out for them, and they were tucking in as usual when a roe  deer doe  suddenly walked around  from behind of the sheds.   The badgers just looked up and then carried on eating.   The roe just ate all the apples and walked off.  She became a regular  visitor recognised by the odd shaped white patch of fur on her throat,  and still comes in  these days.

The other mammal that will take them is the red squirrel although they mainly take them off the  trees.  We first saw this when the apples were still growing on the trees although it was some time until the squirrels  found them ripe enough to tackle.  One day a squirrel had been at the peanut feeders, ones with lids on the top that they raise with their heads.  Then suddenly, without  warning the squirrel ran along a branch and seized a small apple and ran off with it.   Presumably  it was going to cache the apple somewhere as it was soon back.  A few days later a squirrel sat on a branch and ate part of an apple and from then on it was often seen.   Various birds take apples from various situation whether the fruit is still growing on the trees, tied there after the  fruiting season has finished or just on the ground.  Other mammals will also take apples such as hedgehogs and pine martens let alone mice and rats but so far we have not recorded badgers taking them in our garden  although my books suggest they will.  Most birds will take them wherever the apples are from the various titmice to great spotted woodpeckers and redwings to   chaffinches.   Why not try some slice apples over the New Year?