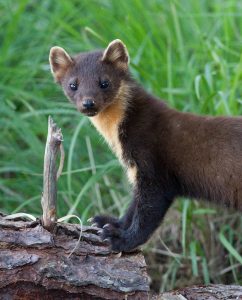 Of the trilogy of major wildlife conservation programmes in the Highlands we have now covered wildcat and  red squirrel so now we turn  to the enigmatic pine marten.  The pine marten has had mixed fortunes, as with the other two mammals, in that for  a very long time persecution was the order of the day.  In the famous, or should it be infamous, list of killed predators between 1837 and 1840 from the estate of Glengarry, south-west of Inverness the pine marten is put into perspective.   Foxes 11, wildcats 198, house cats 78, pine martens 246, polecats 106, weasels and stoats 301 and badgers 67.    These “gibbet” numbers were not exceptional  and could be repeated on most  other estates  throughout the Highlands.   Indeed it is a wonder that the pine martens ever survived such a continuous slaughter.

Much more recently than this the pine martens have been persecuted for raiding young pheasant rearing pens, invading loft spaces of houses to rear  their kits and raiding domestic birds such as chickens, ducks and even rabbits in their hutches.    In many instances  it is the owners fault for not securing their livestock at night but remember that a pine marten can chew through new rabbit netting so precautions have to be sound.  One aspect about the pine  marten, and other predators can be the same, is what some people mistakenly call “blood killing”.  This is where a pine marten will kill far more prey than it apparently needs.   This is not killing  for the sake of killing but leaving food either so it can brings its kits back to feed or come back itself.  However, this does not help the owner, for example of chickens, reacting to the  slaughter when it takes place.

However, changing times and attitudes have been helping the pine marten for some years and one move was the total protection under the legislation in 1988.  Pine martens have also been able to take advantage  of the suitable habitats that widescale planting of conifers created.  Nevertheless the immediate and long term moves remain  essential for the pine marten’s future.  One recent major step forward has been the current work of  the Vincent Wildlife  Trust to translocate them from Scotland to Wales.  A major step forward by the Trust was its development of special nestboxes that only the pine martens would use.   This stops the animals taking over nestboxes erected for goldeneye ducks, barn owls and other species.  Needless to say such programme are costly and initial  figures estimate it at £1.2 million .  According  to the first reports the moving of pine martens form Scotland to Wales  has been successful and the first kits have been born.

Some people are lucky enough to have pine martens visit their gardens and some people even put out food for them.  For those who are not so lucky seeing one is a matter of chance.   Some hotels and Bed and Breakfasts even advertise their presence as part of the attraction.  Elsewhere there are a few hides from which  they can be seen such as the Speyside Wildlife Hide.  There is one at Aigas Field Centre, near Inverness, and at the Kindrogan Field Centre in Perthshire.    As for identification  the pine marten is about the size of a domestic cat with shorter legs and a long, bushy tail.  The ears are large and rounded and at close quarters the creamy inside fur in them may make them visible.   They are essentially nocturnal  animals so if you see one during the day it could well be hungry for some reason, such as the weather, or have hungry  kits.