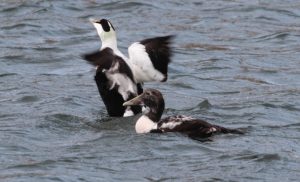 At this time of the year eider ducks  can be found all along the east coast with good viewing points being at Chanonry Point near Fortrose, Loch Fleet near  Golspie and various points to the east from Inverness.  Many of these viewing points can be from the car in comfort, using the car as  a hide, and this has the added advantage  of leaving the eiders undisturbed.   Eiders are seaducks so you may be lucky to also see other seaducks such as long-tailed ducks and scoters plus the chance of  a rarity such as the king eider.   However, for me the favourite of these ducks is the eider for a wide variety of reasons with the outstanding one being their eiderdown.   Eiderdown is the feather down that the females plucks from  their breasts  to line their nests.  Its function is to insulate the clutch of eggs from the cold and to camouflaged them  while the parent is away.   Intriguingly the usual feather down is white which could make the nest and eggs conspicuous from predators so the final lining of the nest is by special brown feathers down for camouflage.    The majority of eiderdown on the world market comes from Iceland.  It is the only down on the market that comes from a wild bird and is the only  down that comes solely from female birds, whilst domestic down is from male and female alike.  The male eider gives no down and do not sit on nests.

Many of the eider colonies that are “farmed” are traditional and man has taken them over to only a certain degree.  The eider are still wild birds  but man makes the conditions easier for them in protecting  the habitats to make it more attractive and expand.  The eider colonies are also protected from fox, mink, dogs and gulls that might disturb or kill the sitting females or take the eggs.   The first collection of eiderdown is removed soon after incubation has begun; this the duck replaces over the next few days.  The second collection  of eiderdown takes place after the eggs have hatched and the ducklings depart with the female.   The down left behind after this departure is often soiled and mixed with pieces of vegetation, and requires very careful cleaning before it can be used in quilts.     Eiderdown is unrivalled in lightness, insulation properties and elasticity which is why it is so desirable and so expensive.

With such a common birds, about 20,000 pairs breed in Scotland  and the winter population is about 65,000 individuals, there have been many myths and folklore about them.   One of its old names is St. Cuthbert’s duck because it breeds in the Farne islands where St. Cuthbert lived part of his life in a cell, and it figures in legends surrounding the Saint.   It has over ten Scots names such as Coo-doos, Dusky Duck, Crattick and Dunter.   In contrast it seems to have only one Gaelic name “Lach-Lochlainneach” which means “wigeon-like”.    At this time of the year most of the eiders you see will be feeding by diving underwater after a variety of food such as mussels, clams, sea urchins, starfish and crabs. They swallow their prey whole and the  crush them with their gizzard.   They often feed in groups for up to 30 minutes at a time.  After feeding, they rest, preen and then feed again throughout the day.  This means they spend most of their time on the sea but they can often be seen by the fact that  gulls  circle above them waiting for any scraps the eider  leave on the surface.  The photograph shows an adult male flapping its wings and an immature male in front.