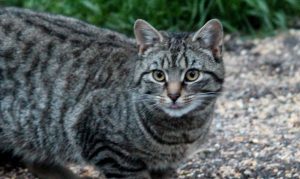 There are now three major wildlife conservation programmes under way that involve mammals  that affect the Highlands.   One involves the wildcat that is by far the rarest mammal in the UK, if you exclude the black rat on the Shiants, with some estimates indicating that there may only be 30 or 40 pure wildcats left in the wild.  So serious is the situation over the wildcat that some people would go further and even say they are on the point of extinction.   Another programme is with the  red squirrel and the programme involves  re-introductions in this mammal’s former range with some of them already having taken place and others either underway or planned for the future.  One recent such re-introduction was with red squirrels being captured on the Black Isle and being released in an area on the west coast.    The third programme, bearing in mind there are others such as the beaver, is the pine marten.  There is an ongoing programme by the Vincent Wildlife Trust to capture pine martens in the  Highlands and re-introduce them to suitable sites in Wales.

The problem over the wildcat, after so much intense persecution in the past, is the hybridisation with feral and/or domestic cats.    This leads to all sorts of problems but one main one is that it means pure wildcats are very difficult to identify  and what may look like a pure wildcat may, I fact, be a hybrid.   Such was the  case with a possible wildcat that turned up in our garden some time ago.    Over the years we had a small number of domestic or feral cats in in the garden of various colours, probable from the village a mile or so away.  Then one day, at dusk,  what looked like a true wildcat was there under the fruit trees.   It only stayed a couple of days and we never saw it again but I did manage to get some photographs and one  of them is reproduced here.   I sent it off to the experts who said it was unlikely to be a true wildcat as the markings were not quite right.  To my mind it was a true wildcat and as far as I am concerned it meant we had a true wildcat in the garden!

The current programme with wildcats has over 20 organisations involved in varying degrees. Six initial study areas have been set up and these are Morvern, Strathpeffer, Angus Glens, Northern Strathspey, Strathavon and Strathbogie.  The main problem to start with  was to find out just what was there such as true wildcats, feral cats and hybrids between the two.  What appealed to me was the use  of trail cameras that will record what is happening over long periods, day and night.  No less than 300 of these cameras have been involved. Having run just one of these cameras in my garden for well over a year now I know how time consuming these can be, although very rewarding.   In the national scheme they have now analysed, for 2016, 200,000 images and found 19 possible wildcats.   Another important part of the programme is to trap, neuter, vaccinate and return feral cats or hybrids to the wild and around 30 of these were returned. As a background to this field recording genetic research at Edinburgh Zoo has indicated that there are now 80 wildcats in zoos and wildlife parks across the UK that may be suitable for conservation breeding.  Coupled  with this the Royal Zoological Society built their first off-show breeding enclosures ready to breed wildcats for later release.   Exciting times for wildcats so next week we will look at what is happening in the  world of red squirrels.