First Signs of Spring – Ray Collier – Wildlife in the North 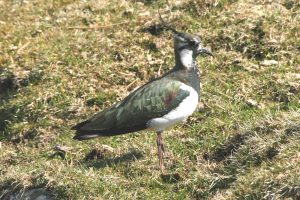 Driving back over the Drummossie Moor just south of Inverness I suddenly decided I need another sign of spring.  Perhaps it was simply age or perhaps the gorse on the side of the road.   The gorse was interesting because as I left Inverness there was an abundance of its bright yellow flowers on the shrubs and the further I went over the moor the flowering decreased. On the south of the moor there were only odd patches of flowers.   The reason for this  change of flowering is that the nearer the coast you get the weather is  slightly  milder.  As for signs of spring, I had already seen snowdrops  and butterbur at Udale Bay on the Black Isle  near Cromarty this year.    Still no frogs though and there was also the fact that there was still some snow and ice about so all thoughts of bird migrants such as swallow and willow warbler faded rapidly.

However, as if to crystallise my thought about spring, across the road, fairly high up, flew a flock of 15 lapwings  with their characteristic odd flapping movement of their broad black and white wings.   They may not be typical bird migrants to many but to me they have always typified spring when they are inland in small groups.    The lapwing flying over the moor could well have spent the winter in Ireland or on the Continent in France, Spain or Portugal so they could well have been migrants,  although not from very far.  Certainly they were the first lapwings I had seen in the area since last summer when two or three pairs  were breeding on the part of the moor I was driving through.

Of all the waders breeding inland  the lapwing has fared the worst through the dramatic  changes in  agricultural techniques.  In the part of Strathnairn where we live we moved there 30 years ago and the breeding waders included  curlew, lapwing, redshank, common snipe and oystercatcher.  The first to go was the lapwing and only the curlew now lingers on as the rest have gone.    This decline is reflected in many other parts of the Highlands.     There may well be around 50,000 pairs still breeding in Scotland each year  that is a significant part of the UK breeding total but the numbers are still seriously declining.    Numbers have,  incredibly, halved since 1999.    One of the biggest problems of the ground nesting waders, including the lapwings, are the predators on the eggs, from  mammals to birds.     The hooded crows and carrion  crows are, perhaps, the worst  as one crow  will entice the pair off their nest while the other sneaks in and another  clutch of eggs is gone.  It is difficult to know just when this overall decline will ease as agriculture  seems to get more intensified as the years go by.

One local name of lapwings is “Flapper” after their wing beats  but the commonest local name is “Peesie” whilst the collective names, which I still do not understand, is “Deceit”  or “Desert”.   There is an abundance of Scots names, over 30, including “Tee Whip”, “Scochad” and “Wallop”.  The commonest of the three Gaelic names is “Curracag” meaning “With a bonnet”.   In the past the lapwing has been hated in Scotland, partly because it is alleged to have betrayed the Covenanters in the hills by its restless cries but also because these birds, which habitually called “Bewitched, bewitched”, are the spirits of the dead who cannot rest and have returned  to haunt the earth.