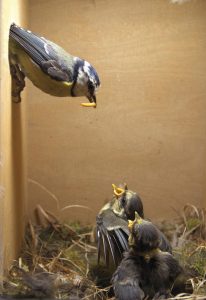 Some people may have some romantic ideas about 14th February but to others is signals National Nest Box Week (14th– 21st February).  The fact that this scheme has now been running for 19 years shows just  how popular it has been.  It also indicates how valuable this has been to hole nesting birds, whether small such as for blue tits and robins, or large such as for  barn owls and kestrels.    The first question to ask if what birds do you want to breed  and to start with it is better to choose those birds that are already coming into the  garden such as for feeding.   Once you have chosen you could be ambitious and choose others that you would like to attract into the garden from birds that may feed elsewhere.  Then once you decide which birds  you would like to attract where do you get information about Nest Boxes from?

To get an idea of cost and which Nest Box for which bird you can simply go along to the nearest  large Garden Centre where there is often an almost bewildering display of types.   Another source of information is in many of the books on wildlife  gardening and one that has recently  come out is “Gardening for Wildlife” by Adrian Thomas published by Bloomsbury Natural History 2017.   It divides the Nest Boxes into “Nest boxes with round holes”, “Nest Boxes with an open front” and “Unusual Boxes”.  The latter include tree creeper, house martin and swift.   This very useful book also give measurements   which means  you can make your own Nest Boxes.   Making your own may seem  time consuming  but it gives great satisfaction to make a Nest Box from scratch and then to see it occupied and the young birds reared.

Once you have the Nest Box to hand then the siting is critical.   There is always the temptation to put a new Nest Box near where you encourage birds to feed such as feeders or bird tables.   This is  a mistake as birds trying to nest and others trying to feed see the others as in competition and there  is  disturbance to all the birds involved.  In any  case the siting of the Nest Boxes should be out of your sight as if you can see them so can predators.   So some cover is necessary especially with such open fronted boxes such as those for robins or spotted flycatchers.   Attaching the Nest Box to a fence or tree needs stressing.  Many of the Nest Boxes you can buy just give a piece of metal to attach it to the top of the Nest Box.  If this is the case bear in mind you will need another at the base of the box, which manufacturers seem to forget.  Otherwise in very windy weather the Nest Box may turn being pivoted only at the top.   Also be wary of the rounded nest hole as I prefer this to be 28mm. If it is smaller look elsewhere as it means none of the birds will manage to get in!.   One recent innovation is the use of miniature cameras so that you can see what is happened inside the Nest Box as the image  is relayed to your computer or television.  The photograph shows a blue tit feeding young inside a Nest Box.   The price of these, sometimes even with a Nest Box in the package,  is coming down all the time so look out for bargains.   One interesting point that is often raised is why we need to put up Nest Boxes?  The answer is simply that  natural holes, whether large or small, have been drastically reduced  as old woodland is felled or thinned.  New plantations take very many years before natural holes develop.    Once you have Nest Boxes for birds in the garden then why not get ambitious and look at the possibility of Nest Boxes for animals in the garden from hedgehogs to bats as we shall look at those next week.