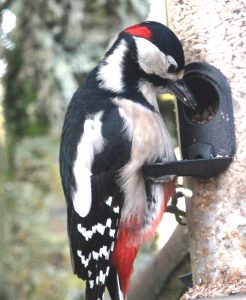 For the last two  weeks the great spotted woodpeckers have been “drumming” away in the birch/rowan woodland above and below the house.  Drumming means hammering  away at bark  with their short but powerful beaks,  either as a form of display or to find food.  My thoughts went to what sort of breeding season they might have this year as last year it was the worst that we can recall in the last 30 years we have been living in this strath.   I still had not worked out why last year was so bad for them but by chance I read a note from the British Trust for Ornithology about the decline in sparrowhawks last year.  Apparently the very poor season for small birds  came about  because of wet weather and poor insect supply.     This affected sparrowhawks because, particularly the smaller males, rely on such small birds for the bulk of their food.    So could this be the underlying cause of the woodpeckers problems last year?

Looking at my wildlife notebooks last year there were problems with the starlings in the doocot in the garden.   Normally what happens is that the first brood of chicks come off just in time for the woodpeckers to take all the chicks just  before they have fledged.  However the starlings have another brood that is normally successful.  This year it was almost as if the  starlings knew there would be food problems later  in the summer so they laid early and the first brood were off before the woodpeckers had fledged.  Then the starlings just gave up for this year.     On the small bird front the siskins had a very good year but they are early breeding birds and it was not long before their first  chicks had fledged and were eager to get at the nyger feeders.   Then it seemed as though the  number of small fledglings decreased compared with previous years.

But how reliant are great spotted woodpeckers on small birds?   Certainly they will freely take small birds out of nestboxes and any of us who have put up small boxes for titmice will know the values of putting a metal plate around the entrance  hole.  The woodpeckers are a lot cleverer than that as even if you put a plate on  the bird will register the chicks are in there and just hack their way in. However they do it  is in the same way as they find grubs of insects.    They hammer at the bark   or nestbox and whatever  is inside may make a slight noise and it is enough to alert the woodpecker.    So this formidable beak of the  woodpecker  has a number of purposes.  It can dig out food such as chicks  and  grubs, and it can be used  as display or contact calls.  A unique feature is that it can be used to make an anvil on which nuts etc. can be placed to break open.  As an indication of the  wide range of uses then just look at the garden.     Do you know of any other bird that will take such a wide variety of food?   They will freely tackle peanuts, mixed seed, bread and to see how they tackle suet balls is a revelation.  I remember the  amazement when I watched a woodpecker demolish a whole apple that had fallen onto the ground.  Its stiff tail may be advantageous  to climb bark but to see it used on the ground as a prop is  almost amusing.