You searched for properties in Fort Augustus Abbey.

Situated in the picturesque village of Fort Augustus in the heart of the Great Glen.

The Abbey itself is a magnificent historic building. It originated as a military garrison in 1729 to a design by General Wade, for the suppression of Highland Jacobites. As times became more peaceful, the British military no longer had any use for the fort and sold it to Lord Lovat, who used it as a shooting lodge. In the 1870’s Lord Lovat gave the fort to an order of monks. By 1880 it became a place of peace inhabited by an order of St Benedictine monks who added to it a monastery, church, chapel and independent school. The school closed in 1993 and by 1998 the last monks left the Abbey. The Abbey is now a variety of residential apartments many of which are available for self catering breaks, why not come and join the highland club and book a holiday at one of the most exclusive properties in the Scottish highlands.

Set in 21 acres of its own mature grounds which extend down to the southern shores of Loch Ness, the Abbey has now become an ideal holiday destination. Facilities on site include The Boathouse; a loch-side restaurant, Highland Club Lounge with comfortable seating, full size snooker table, table top football and Wi-Fi access, loch-side barbecue area, woodland adventure playground, cricket pitch and nets, tennis court, croquet lawn, boules terrain, giant chess, badminton, 5 a side football and table tennis. Also available is a concierge, gun and rod store, mooring and fishing rights and access to sports/recreation facilities on local estates. Facilities yet to be completed include a mini-gym, sauna and steam room and swimming pool.

Wilderness Cottages are pleased to offer a range of properties at the Abbey, accommodation can be found in the Monastery, Moat House, Old School, Raven Wing and Courtyard Cottages.

The Monastery is by far the largest building on site spread over four floors. It faces Loch Ness and offers some splendid loch views.

In it’s past the basement was home to the printing machines of the Abbey Press once famous for producing a booklet on the Loch Ness Monster! The ground floor houses three major rooms, the Monks Refectory to the left, the Monastic Library in the centre and the Calefactory to the right. Between the Library and Calefactory is the impressive Court of Arches a four way crossroads in the Cloisters making support columns for the Monastic Bell Tower. The first and second floors were formerly the monk’s cells. They were four and a half metres square simply furnished with a chair, writing desk, wardrobe and simple bed far more basic than the luxury accommodation now provided in the Monastery.

The Moat House was also known as the Hospice, it was never a hospital but a place where the monks offered their hospitality to visitors. The entrance over the moat dates to the 19th century and replaced the original fort entrance. The heavy entrance door contains a small grill through which an eye would appear to ask your business if visiting the Abbey. Once permitted entry you met with the monk in the first room on the left in the Hospice building – although sometimes a response to your call could take up to 5 minutes. It is perhaps as well there was such interesting stonework above the doorway to occupy the time whilst waiting for an answer!

The rest of the ground floor dates back to the 18th century and the original fort, rhomboidal keystones feature over doorways. The final room on the left to which there is no longer access was used as a gunpowder magazine and floored with special hand made red bricks which would not cause sparks. The monks later converted this to their chapel where relics of saints were kept. Opposite the chapel is a Roman sculpture of the Capitoline triad – showing Jupiter, Juno and Minerva.

From the Moat House there are stunning views across the Cloisters garden towards the Monastery building and Bell Tower or over the cricket pitch towards the village of Fort Augustus and a number of fascinating stained glass windows to marvel at during your stay.

The Old School as its name would suggest contained most of the Abbeys classrooms with the dormitories situated on the top floor. The clock tower entrance is the most dominating feature of the Old School building; it contains a staircase of curving ebony balustrades. The tower itself is one hundred feet tall; its clock although in working order is not used because of the volume of the chimes every quarter of an hour. The tower is also home to a carillon of 9 bells that were rung on Sundays and at festival times. Featured on the exterior of the tower is a statue of St Benedict who gave his name to the abbey. The statue shows St Benedict holding a piece of bread with pet raven at his feet. This denotes hospitality a sentiment echoed in the accommodation provided in the Old School Apartments. During your stay take in the fantastic views through the feature arched and carved windows.

This part of the Abbey was built for extra school rooms to cope with the post war expansion at the end of the 1950’s. The ground floor was home to the school hall and stage. The first floor housed the science laboratories, where Father Benedict Seed made his sloe gin and honey mead. The top floor held the school library and here joined the Old School wing. The whole of the building suffered concrete failure and has been almost totally rebuilt to correct this. The Raven Wing is now a crisp cream contemporary looking building to the left of the Abbey between the Moat House and Old School. Above the doors to the main entrance of the Raven Wing is a stone carving of the motto of St Benedict’s Abbey PAX IN VIRTUTE – Peace with Righteous nous

The Courtyard Cottages are a development of the Abbey grounds creating luxury accommodation overlooking the banks of the River Tarff. Here you can relax and unwind in a modern environment whilst having all the history and facilities of the Abbey to explore during your stay. Take in the pleasant surroundings from your own patio area and relax in the evenings in front of the cosy wood burning stove. 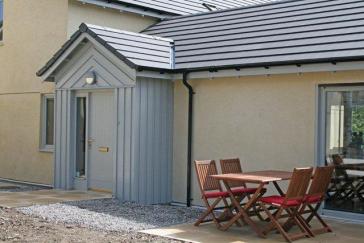 Courtyard Cottage No 5 - Garden Cottage is one of the twelve cottages building on what would have been the Monk's garden. The cottage is comfortably furnished and makes a very relaxing place to stay. The shores of Loch Ness are just a short walk.

Moat House 1 is in one of the oldest parts of the Abbey. The apartment is situated over two floors with ground floor access. The apartment has been furnished with comfort in mind and is ideal for a relaxing holiday close to Loch Ness. 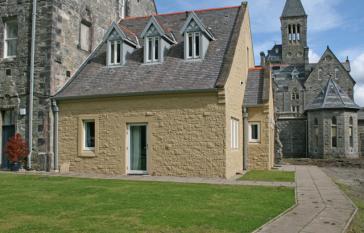 Moat House 10 is a duplex apartment adjacent to the Moat House and is an ideal retreat for anyone wanting to spend some quality time just relaxing, and enjoying the atmosphere of this historic abbey. Walking, cycling and golf can be enjoyed locally. 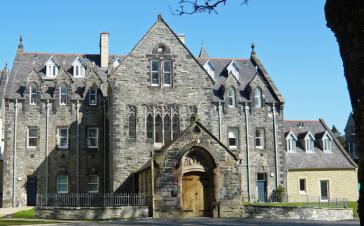 Moat House 7 is a charming and comfortable apartment situated on the top floor. The apartment has views onto the cloisters and Monastery bell tower as well as the spacious grounds. Fort Augustus and Loch Ness is a short walk from the apartment. 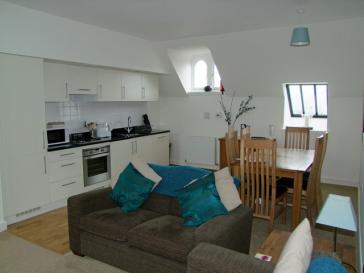 Monastery 17 is situated on the top floor and has a large open plan living area with a view of Loch Ness and also looks out on the cloister gardens. The bathroom in this apartment has the most magnificent view of Loch Ness. 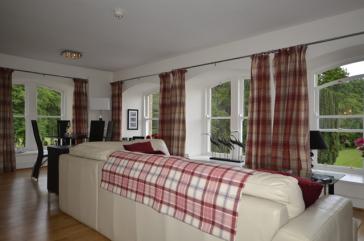 Old School 10 is a first floor luxury apartment with views over the grounds to the canal and hills beyond. The four arched windows bring light and wide vistas to the spacious lounge. A short walk through the grounds takes you to shores of Loch Ness.