Ray Colliers Wildlife in the North – First signs of Spring 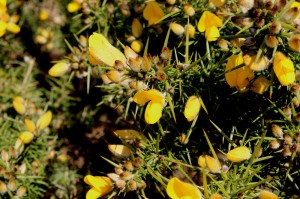 Amidst the cold, frost and snow of the last few weeks or so it was always tempting to look out for the first signs of spring.  Despite the weather they were certainly there with butterbur on the banks of Loch Ness near Dores  and primroses in blossom on the south facing slopes of the A 82 north of Fort Augustus.   Some waders such as  curlew and oystercatchers had started to move back  back into the straths and glens and there was  a general feeling of optimism despite  the cold weather that persisted.   However, if you looked hard enough there was one shrub that could be found in full flower all the way through the winter and one that is often just accepted or largely overlooked.  The shrub is whin,   sometimes known  outside the north as gorse or furze.   Whin can dominate the landscape to the exclusion of many other plants but  it is a refuge for all manner of wildlife throughout the year.  There is an old saying that “When the gorse is out of bloom, kissing is out of fashion”.  Romantics may have no fears  as the blossoms can  be found,  somewhere, all the year round.

Despite its appearance  is still susceptible to the cold as whilst you often have to search at inland sites to find the  blossoms along the coast it is commonly in flower.  A good example was  the photograph that I took  in mid March  at Alterlie Point to the east of Inverness.  The temperatures in and around  Inverness are slightly warmer than those away  from the coast.    So at Alterlie Point there were several  bushes that were well out  and there was just that hint of the fragrance  of almond from the rich yellow blossoms.   There are some very extensive areas dominated  by whins and one of the most spectacular, especially in the spring and summer, is parts of  Drummossie Moor.  The main area  flanks either side of the minor road between Inverness Academy and Farr.  When the  blossoms are fully out there is an almost overwhelming  fragrance from them that even filters into  vehicles passing along  the road.

As with other large areas of whins,  it provides shelter, food and breeding sites  for a few specialised birds that includes  the stonechat.  These are small birds belonging to the same family as whinchats but, unlike the latter, stonechats stay here all the year round.  There are reputed to be around 20,000 pairs  in Scotland and they are more than holding their own with the recent series of relatively milder winters.    If the winter is severe their numbers “crash” but will recover again as they can raise two  broods in one year.   Amongst the wide range of wildlife that whins support  there is, unexpected, a  butterfly whose caterpillars feed  on whin  which may seem  rather unpalatable to us.   It is the  green hairstreak that, as the name suggests, has green undersides and as you  get a closer look they are very attractive.  The books describe the  green as “emerald green” which is apt.  I make a point of searching for them every year but the dark upper sides can make them very difficult  to see and they are easily overlooked.    Whins have had a very long  history of use by ourselves, varying from  fodder for stock, when crushed in special machines, to the making of whin blossom  wine.   They were even  planted near croft houses to put the washing on them to dry as the thorns kept the clothes from blowing away.  One of the most versatile and important shrubs in the  countryside.