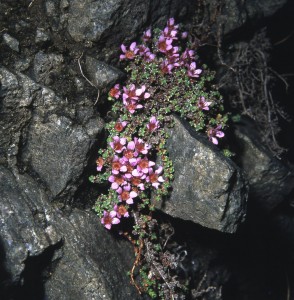 Just in the same way as some naturalists focus on birds of prey, butterflies or deer others look at wild flowers.  The wild flowers sometimes  means orchids as they are very attractive and some are quite rare and difficult to locate.   They also have fascinating names such as frog, butterfly, bee, fragrant, birds’ nest and early purple.  One of the other groups of wild flowers that attract naturalists  are the saxifrages and, as with the orchids, many are very attractive and some quite rare.   Some people go even further with their approach and try to photograph every species.  Orchids are a favourite for this approach  although saxifrages come a close second.    Saxifrages also have the advantage of  being  well represented  in gardens often being classed as rockery plants or even alpine plants as some grow at high altitudes.

The names of saxifrages may not be quite so attractive as the orchids but they are still intriguing such as  starry, yellow mountain,  mossy,  arctic and Highland.     One of the saxifrages that is well distributed in the Highlands, and for that matter in the Islands, is the very attractive purple saxifrage.  This saxifrage is renowned for two reasons with one being the fact that it is the only saxifrage in   the UK with, as its name suggests,  purple flowers. The second point is  that it is the earliest of the saxifrages to flower.   I first found this when I was recording a raven’s nest in March one year on a  steep cliff in a high corrie.  Ravens are well known for being one of the earliest of nesting birds with eggs in the  nest as early as March.  The other birds that are that early are the golden eagles, herons and, perhaps surprisingly, the relatively small dipper.  As for the raven’s nest  I was checking out, I had reached the  final part of the steep cliff face when  there, all around me, were the trailing stems of purple  saxifrage.  It was a sight of glorious purple flowers on an otherwise black and drab looking landscape.

Another unusual aspect of the purple saxifrage is that whilst it can be found on damp, stony and rocky areas on hills it is, in   contrast,  also found near sea level in the north west.   There is some variation in the colour of the flowers as, although the general colour is perhaps best described as rosy-red, they can vary.    They range from  deep purple to pink  even white.   This  variation is often perpetuated by gardeners.  The colour variations and those with large flowers have been selected out for gardens and given horticultural names.  Their spreading  form makes them ideal for garden rockeries in trailing over steep slopes and stones.   There is the long held belief that saxifrages are able to crack stones to enable them  to gain a foothold to grow.  This is reflected in their  Latin name as saxum means rock and frango means break.  It means that the plants are able to create  their own foothold by the cracks they form.  It is no surprise then when the Gaelic word for the purple saxifrage is  Clach-bhriseach Purpaidh  meaning “purple stone-breaker”

The other early saxifrages to flower in the spring are the two golden saxifrages, the opposite –leaved and the alternate-leaved.  The former is the commoner of the two and it grows in damp woods, ditch sides, burn ravines and mountain flushes.   They are attractive flowers but the name golden is perhaps an exaggeration as the colour  of the flowers is yellow which   is a better description.   So why not take up the hunt for saxifrage’s this year and photograph them?