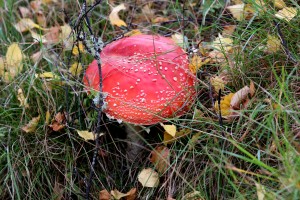 There has been a bumper crop of berries and seeds in the wider countryside despite the fact that the seasons were running later than usual.  The easiest example are the rowans which have had a good a year as I can ever recall although  there are many other berries that have been just as good.   There is another group that has scarcely been mentioned this  year and that is the various types of mushrooms, some call them fungi.   You cannot really overlook the various types of mushrooms as you can see them in such a wide variety of places from roadside verge to woodland and grassland to heathland.   There is such a variety in terms of colour, size and shape, and this is the main problem as a number are difficult to identify.   So if you decide to eat mushrooms there is the overriding issue that  a small number of mushrooms are in fact poisonous  to varying degrees.   One slight compensation is that whilst most  may make you ill, and they affect some people more than others, there are only  very few that can kill you!

Some mushrooms that can make you ill are readily apparent because of their colour and one is the rather common fly agaric.   It is almost as though it’s reddish colour is a warning to be wary.  Fly agaric grows in  a wide range  of places such as woodland and hedgerow. The specimen in the photograph, about seven inches in diameter,  is typical of the warning  red  colour.  I photographed it under birch scrub on the side of the River Findhorn not far from the cluster of houses called Ruthven, south east of Inverness.

In recent years, with an upsurge of interest in mushrooms as a rich and natural food source, there has also been a change of attitude to them, and deservedly so.  At one time most people just pulled the mushrooms out of the  ground, stuck them in a polythene bag with many others, and that was that until you were at home and prepared them.   Now most people  are careful how they handle them .  Due care and attention  starts with actually “picking” the mushroom.  In the long term the most important part of the mushroom is largely underground.  So instead of just pulling  them upwards  they need a different treatment.  Once they are picked they need careful handling and should be placed in a suitable  container, one of the old fashioned trugs are ideal.

If I am out collecting  mushrooms to eat, generally chanterelles these days,  then I take what is termed a “mushroom knife” with me.  This is specially designed solely for collecting mushrooms and should be used by people far more often than they are.  Mine has a single  blade, three inches long, with a sharp edge on one side and a heavily serrated edge on the upper part.   The sharp edge of the blade is for neatly cutting the stalk at the base.  The serrated edge is to take off any debris, dirt etc. from the cap and stalk.  At the other  end of the knife is a small brush and this is used to carefully clean the gills or ridges under the cap.   The first rough cleaning  should be done on site and the fine cleaning at home.  Never wash or wet mushrooms but wipe them with a clean, dry cloth.  They are then ready for cooking/ eating.

There are now so many books on the market about mushrooms it is difficult to choose a good one.  One that I look at more than any other is “Mushrooming without Fear” by Alexander Schwab. Pub 2006 by Merlin Unwin Books Ltd. at £14.99