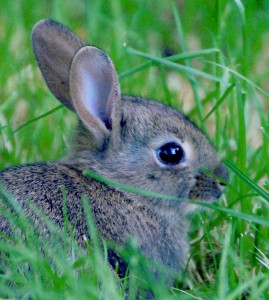 Two years ago I wrote in these notes about the worrying situation over rabbit numbers in the Highlands. With so much talk about the increase in numbers of various deer, the rabbit situation has taken a back seat. For example, the media headlines last week indicated the sheer increase in numbers of some deer such as the red deer has “trebled its numbers in the last 30 years”. There are similar fairly accurate figures for roe deer and sika, mainly because they undergo regular counts so the numbers are reasonably reliable. A good example of such increases is that the counts show that if you draw a triangle between Inverness, Fort Augustus and Strathdearn to the east then there are more sika deer than red and roe deer put together.

Once you start looking at numbers of other animals the problems occur. It is easy to think that their numbers are declining or increasing without any facts to support them. All too often the suggestion of decline or increase comes from a very small part of the countryside and to use this on a wider scale can be very misleading. So the recent report from various organisations, backed by studying various animals in depth, has been very welcome. Apart from deer, the studies show that amongst the animals that have, and are, showing a marked decrease are the rabbit and mountain hare. Interestingly the report indicates that the numbers of brown hares are relatively stable. Compared with increases in deer numbers that have serious consequences, such as adverse changes in the fabric of the countryside, why should we be bothered about the changes in the rabbit? In the latest survey the rabbit has been shown to have had a dramatic decrease in numbers of 48% whilst the mountain hare has shown a similar marked decrease of 43%.

In any case the rabbit is an introduced animal, albeit a long time ago, and it has, in the past posed all sorts of serious agricultural problems that have cost the nation millions of pounds. Their impact on farmers’ crops or on woodland regeneration has, in many areas, been devastating. On the other hand for a very long time they were a reliable source of food for people and this can never be overestimated. It is not difficult to see such drop a in numbers of rabbits as my recent car journeys have indicated. In the last few weeks I have been north to Loch Fleet, south to Fort Augustus and east to the Cairngorms. On each of these journeys there was only one dead rabbit on the road and no live ones at all in the adjoining fields where they used to graze in large numbers. At one time such declines could be readily put down to the disease Myxomatosis since its origin from outbreaks in the 1950s. Now it appears that a new disease is rampant, rabbit haemorrhagic disease, although the extent of this in the Highlands has not been properly assessed.

The main problem with the decrease in the rabbits is the adverse effect on the very many predators that rely on them whether it be the adult rabbits or their young. This is not confined to catching them as the dead rabbits on the road are regular sources of food for many birds and animals from fox to buzzard and pine marten to red kites. So what does the future hold for the rabbit and all these predators?