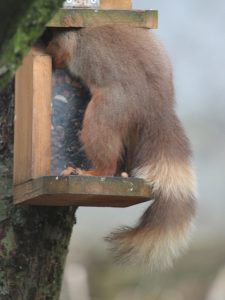 People who feed red squirrels in their gardens in and around Inverness and beyond may be surprised to know that at one time these delightful animals were persecuted.  Of all the animals in the Highlands, the red squirrel has had very mixed fortunes from re-introductions to severe culling and then back to re-introductions.   If we go back to the 18th century in the Highlands, the red squirrel may well have been extinct largely to do with deforestation.    Re-introductions were made in various areas in Scotland to ten estates in the 18th and 19th century but not until 1844 in the northern  Highlands.  Then Lady Lovat re-introduced introduced them to the Beaufort Castle Estate  west of Inverness  by Beauly.  They then spread rapidly to the widespread new plantations of conifers and so much so that by 1903 they were doing considerable  damage to young trees.

It seems incredible with our current  programme of “saving” the red squirrel that it was necessary to form the Highland Squirrel Club in 1903 to 1946 with the sole purpose of killing  them.  Between those years the Club killed at least 102,900 red squirrels and that number is low because it is based on payments made for the bounty on the tails.  Undoubtedly some estates did not bother to send in all the tails for the bounty.   Most of the estates in the Highlands were active members including all those around Inverness, including the Beaufort Estate  where the re-introduction  had started in 1844.    Fortunately the papers for the Club were deposited with Duncan and Duncan, a Dingwall firm of lawyers.  After  extensive  searches I found these papers in the Highland Regional Council Archive and I have a copy of all the annual reports and correspondence.  The originals are, hopefully, still with the Archive Office.

In contrast the conservation of the red squirrels in the Highlands is being tackled in two major ways with one of them being the unlikely role that many readers play in feeding them in gardens.   Over the last few decades feeding wildlife in the  garden has been transformed into a huge commercial business although most of its effort is towards birds.  Animals have not lost out and the red squirrel is a  good example.   If the old fashioned wire bird feeder  is now  a standard feeder for a wide range of  small birds then so is the new type feeder for red squirrels.  It consists of a box similar in size for a nest box for small birds such as titmice   etc.  However, the squirrel box has a clear plastic  front and a hinged lid.  The squirrel  sits on a ledge on the base of the box of the box  and they have learnt to push up the lid with their  noses and help themselves to the peanuts.  The photograph was taken of a squirrel at a feeder that is on a fruit tree about six feet from one end of the house and taken through a window.  This individual is easy to identify  by the light and dark banding on the tail.

Whilst the feeding of red squirrels in our gardens is important so is the latest round of re-locations that has been ongoing for a few years.  The one a few years ago at Dundonnell south west of Ullappol was successful but  highlighted the need for monitoring  after the movement of reds squirrels had  taken place.  The expense of moving the animals is large enough but the follow up is equally important – and expensive.  Others are now in the  pipeline and will help to ensure the future of these enigmatic animals that are  a joy to watch whether in woodland or at a garden feeder.