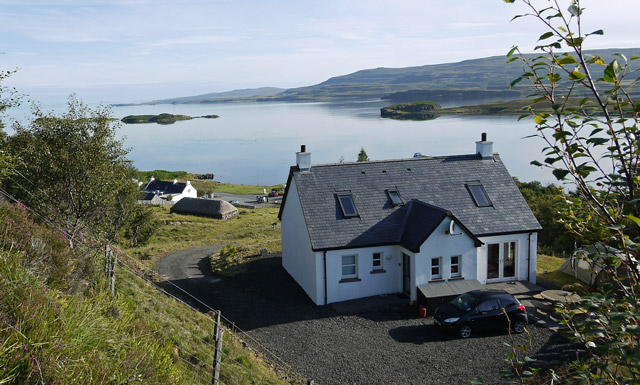 Rhundunan is situated in the small settlement of Colbost – which has been put on the map by being the home of The Three Chimneys, voted as being one of the top 5 restaurants in the world. Whilst the food is delicious at the Three Chimneys, people from all over the world – including celebrities – mainly visit the restaurant because of its awe-inspiring views over Loch Dunvegan, the Cuillin Hills and over to the Outer Hebrides.

So just imagine the delight of our guests at Rhundunan who arrive to realise that the views from this stylish house (built by the previous owners of the Three Chimneys) are even more amazing, nestling as it does on the hillside just above its celebrated neighbour, which is just 200 metres from the front door. Colbost itself is a crofting settlement, in the north west of the island, which runs along the side of Loch Dunvegan.

Rhundunan offers a traditional exterior design which blends with the crofting architecture of the area, whilst the interior offers a modern contemporary finish. It’s a rarity to find such a stylish holiday home in such a rugged landscape.

The living room features a dramatic double height vaulted ceiling with balcony area and large cathedral style windows with views to die for. With a  reclining sofa from which to curl up in front of the fire or the large screen TV, you can enjoy cosy nights in after a day of exertions. The lounge opens on to a well equipped kitchen, with granite worktops, big oak dining table and all mod cons.

There’s also a king-size master bedroom complete with an en-suite shower room, two additional bedrooms, family bathroom and a kitchen and utility room. The property has been well equipped and furnished to a high standard.

Rhundunan, from its elevated position, commands panoramic views out across Loch Dunvegan to the Outer Hebrides in the North. However, it does not end there, its unique position on the island also offers uninterrupted views of the Cuillin mountains in the south, as well as the flat top peaks of Healabhal Mhor (1538ft) and Healabhal Bheag (1600ft), better known as MacLeod's Tables, called after the legendary clan chief who apparently held an open air feast on the lower of the two for James V.

Also on the doorstep is the Colbost Croft Museum. The museum, a restored blackhouse, shows how the islanders would have lived in the 1800s. The museum has a restored illegal still, where islanders would brew their own “water of life”. Nowadays the island has its own distillery at Talisker producing one of the most well known of Scottish whiskies. The single malt being produced here is consistently regarded by experts as one of the very best single malts available; it is characterized by a powerful and peppery taste and has been referred to as “the lava of the Cuillins”. The visitor centre and tour here are well worth a visit.

The area lying to the west of Dunvegan is referred to as the Duirinish peninsula. Most of this area is wild and uninhabited so is an ideal spot for wildlife enthusiasts and hill walkers of all levels, and a haven for bird watchers. The sea-loch coastline offers opportunities to see golden eagles, sea eagles, basking sharks and whales.

One of the best walks on the coastline is nearby Neist Point complete with its lighthouse and caves. The views from here are spectacular and, on a clear day, the islands of the Outer Hebrides are clearly visible. Dunvegan castle and gardens are just a few miles away where you can also take a boat trip and visit the seal islands. The wonderful coral beaches just north of Dunvegan are also well worth a walk.

The main population towns on the island are Broadford and Portree, both of these have a good range of cafes, restaurants and shops selling locally made clothing, crafts and jewellery, together with larger supermarkets for all your holiday needs. Portree is also home to the Aros Centre with its cinema and restaurant. The village of Dunvegan – just 2.5 miles away - also has an excellent bakery, cafes and restaurant – in particular, The Old School Restaurant is definitely worth a visit.

Rhundunan – situated in such a stunning environment and with its two double bedrooms and a bunk room – has everything you need for a family holiday, a friends get-together or maybe just a romantic get-away-from-it-all trip for two.

Included in the price 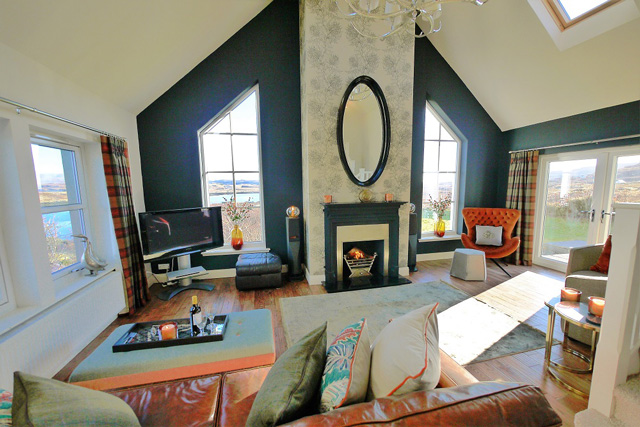 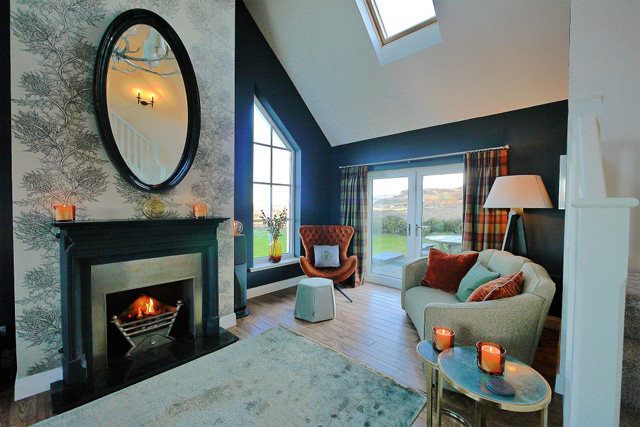 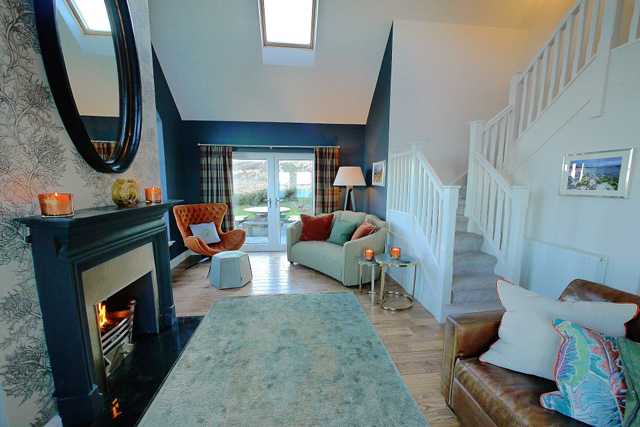 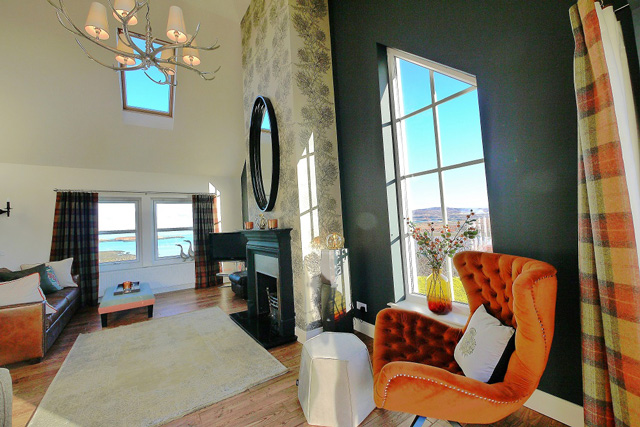 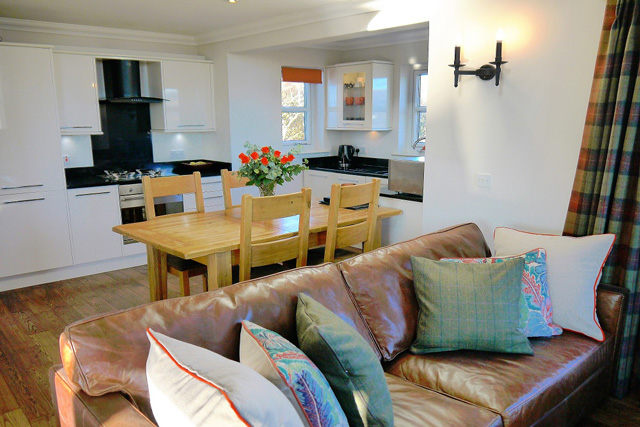 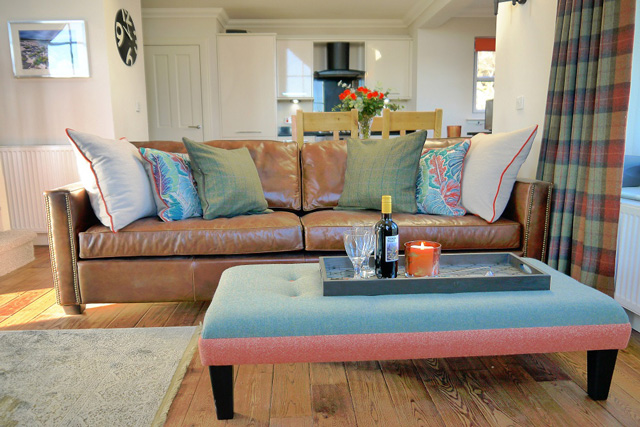 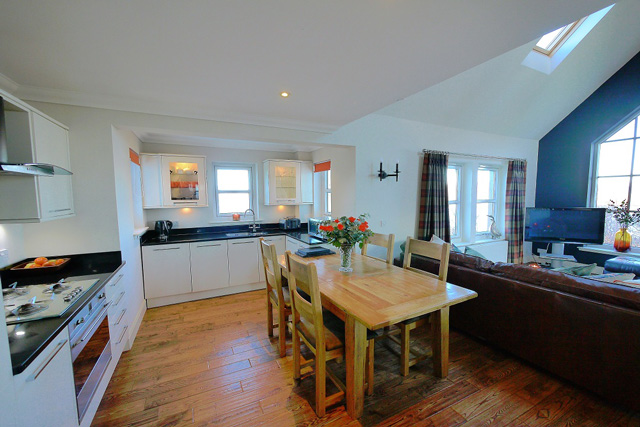 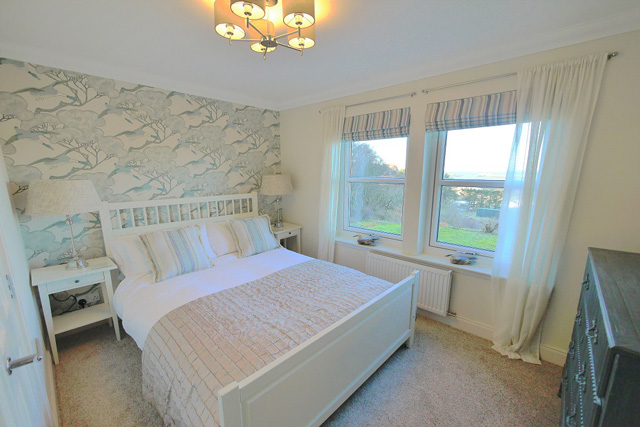 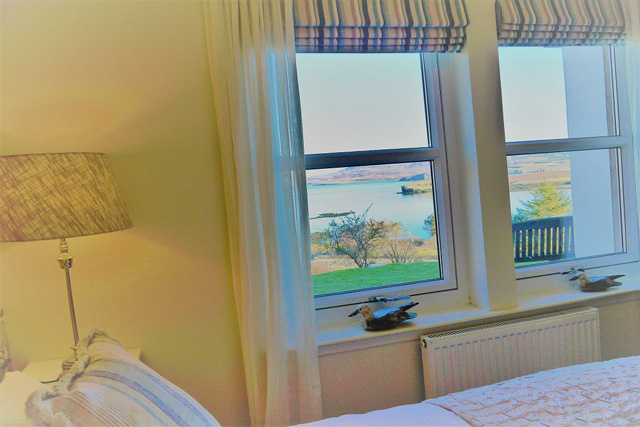 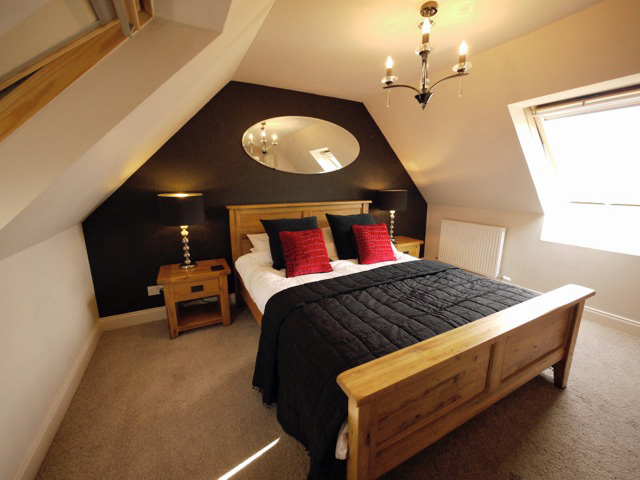 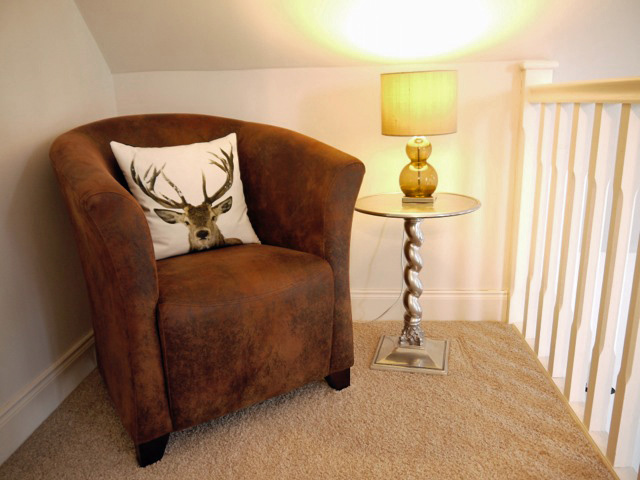 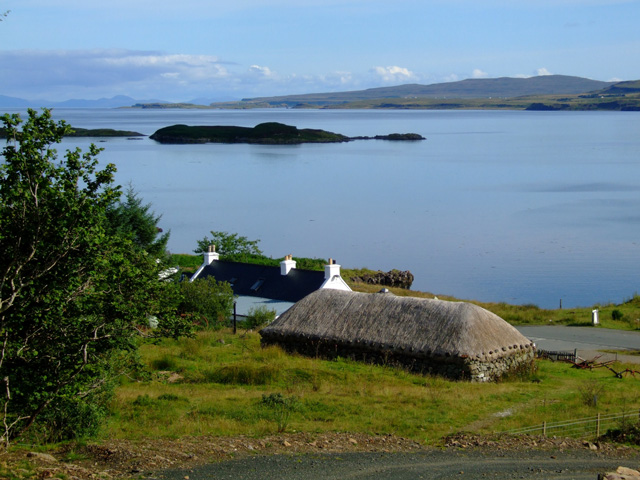 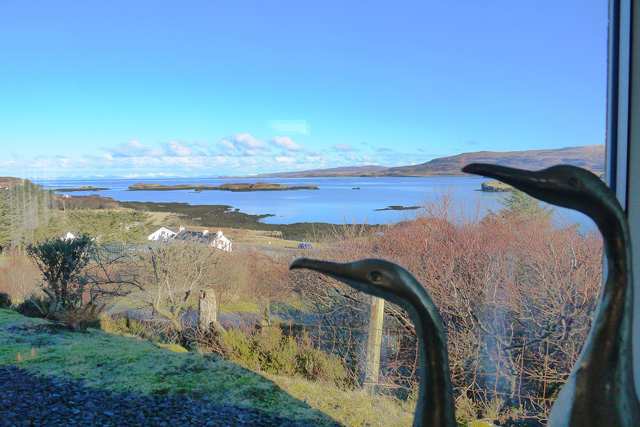 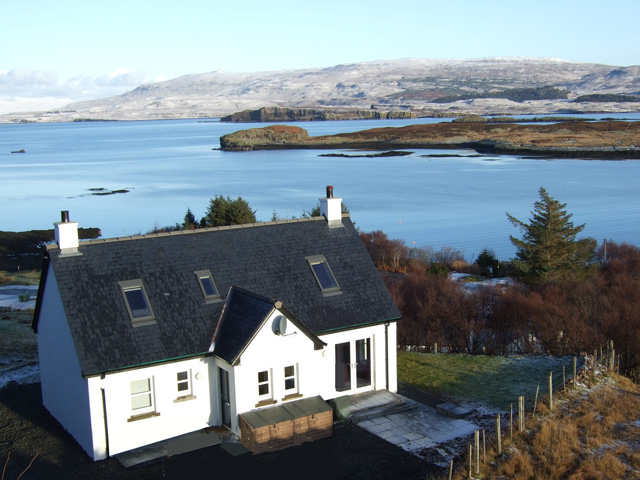 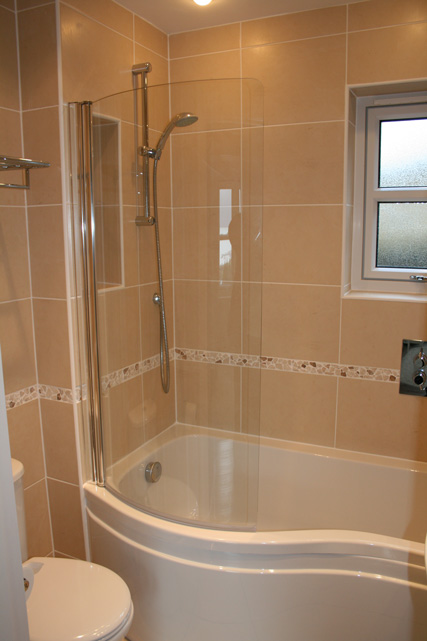 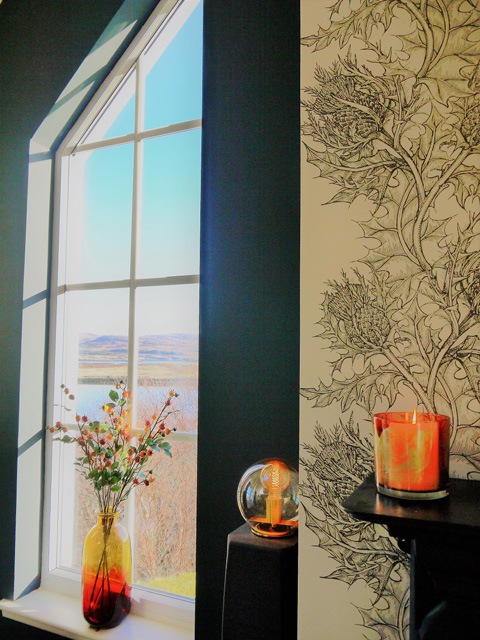 The latest reviews of Rhundunan...

Stunning views and location at this well equipped and comfortable property. The third bedroom is small and perhaps best suited to children. Other than that it was all we could have asked for from a Skye holiday. Wilderness Cottages were very helpful before and during the stay.

What a beautiful house. The views out of every window are amazing. The internal decor really striking. Kitchen area is small - might be tight for 6 people if you are cooking from scratch. However it is really well equipped and again the views make up for it. The whole house was well equipped and really stylish. Lovely quiet spot and we were really sad to leave and would certainly recommend. This is our third wilderness cottage this year- all different- all excellent.

We spent an excellent week here in December.. clean, fresh modern house and importantly for weather very warm. Beautiful view directly on to bay, amazing to watch many changes of light. Easy to access Dunvegan and many other locations.

Rhundunan is a child friendly and comfortable cottage. Whilst we did go out for walks every day (in February), it was a joy to stay in and watch the beautiful landscape around us.

A very well equipped and comfortable cottage with beautiful views in a peaceful location. I would love to return!

Lovely break in a fantastic property, has everything you might need for a 'get away from it all' holiday. Our second visit and well worth it.

Our stay at Rhundunan was very comfortable and it was one of the best houses that we have rented. As a couple we had the house to ourselves and it is well equipped with everything that you need. The utility room came in very handy when we got drenched in a lovely rain storm while on a trip to Coral Beach but that is the beauty of Skye. Great views to keep you mesmerised all day long if you decide to stay in. Will be recommending to all my family and friends and would love to visit again in the future.

Fantastic place, really relaxing away from it all break. Enjoyed the seals on the rocks, and the rabbits in the garden. House has everything you could possibly need, and more besides. Lovely.

Wonderful stay, great value for money and we had a lovely time. The house is very well equipped with a full kitchen, and has stunning views. Added bonus of The Three Chimneys restaurant being at the bottom of the driveway. Would definitely recommend staying here.

One word: Superb. Excellent in every way.

One of the best holiday cottages we've stayed in, with great kitchen, relaxing and airy lounge, comfortable beds and finished off with some superb views. Great location for exploring the northern parts of Skye and a short walk to the Three Chimneys if you fancy treating yourself to a wonderful lunch or dinner.

This is a very beautiful house with everything in it and more you can imagine. We enjoyed the sea view through the big windows very much. It was great how remote and private it felt. An excellent place for a relaxing holiday away from the city.

Rhundunan is an absolutely stunning property in a fabulous location. It's remote, but not impossibly so and the close proximity (about a minute and a half walk) to the magnificent Three Chimneys restaurant is a real bonus. Everything about the property is high quality. We took our 2 teenage sons and had plenty of space -although 6 around the dining table might have felt a little cramped. Views from all windows are spectacular- coral beach, to the seals in the loch & Black Cuillins. Stay there!

Lovely cottage, very comfortable and very well equipped. Would like to come back and stay again. Views out over the loch are stunning.

we have just returned from a week's stay at Rhundunan Colbost Skye. The property was amazing - even better than in the photos and Skye was fantastic. It was one of those rare places where we were genuinely sad to have to leave. We would recommend Skye and Rhundunan and hope to return to both.

Our first time in Skye and we highly recommend this property. The house is contemporary stylish and clean, in a first class location. It's the ideal place (private) to get away from it all with wonderful scenery (views from property include Loch Dunvegan, Cuillins in distance and Coral beaches across the loch, where you can also watch seals from the house with binoculars)but it has the buzz of overlooking folks coming and going from the Three Chimneys restaurant and Colbost Folk museum.Perfect.

Had a brilliant week at Rhundunan, fantastic scenery and wildlife with the added bonus of great weather which I wasn't expecting. Would recommend to anyone. Oh and the standard of the cottage was first class.

April 2012. No complaints at all about this beautiful house.

28th May 2011 Had a lovely week at Rhundunan (despite the weather) the cottage was excellent, well equipped and the views were spectacular. Would definately recommend this cottage.

We had a fantastic and sunny week (4-11 sept. 2010) at Rhundunhan. The house was clean and well equiped. We will return .

Stayed at Rhundunan in early August - excellently presented and equipped cottage with great sea views across to the Western Isles. Would definitely return

We had a wonderful 5 day break at Rhundunan. It was lovely to be in a new house with a very well equipped kitchen and high quality bed linen and towels. We were comfortable and warm and dangerously close to a great restaurant! Wilderness Cottages was recommended to me and I shall recommend you to others.

Guests at Rhundunan rate it:
Excellent
from 24 reviews

More Properties in this Region

We try very hard to ensure our rating system is fair for all. We want our guests to make informed choices and we need to ensure that the review system can't be abused by either previous guests or property owners. With this in mind, we have introduced the following restrictions to our reviews system:

We don't have an exclusion policy on reviews, this wouldn't be fair to our guests, and would serve no purpose. While we encourage our owners to provide the best level of service and exceptional quality, we realise its very difficult to please everyone all of the time. We leave negative comments in published reviews unless we are investigating the issue or if the reviewer is in dispute with the property owner.

Reviewers are asked to rate their holiday out of 5. We ask that, when reading the reviews, you consider that things outside of the control of Wilderness Cottages or property owners can reflect in people's scores (e.g. the weather). It's worthwhile reading all the reviews to get a balanced view of any particular property.

Wilderness Cottages are proud of the level of service we offer and the quality of our properties. We are particularly proud of the amount of 5/5 reviews we receive.